Down for the Count at Paul & Diego's Wedding Reception 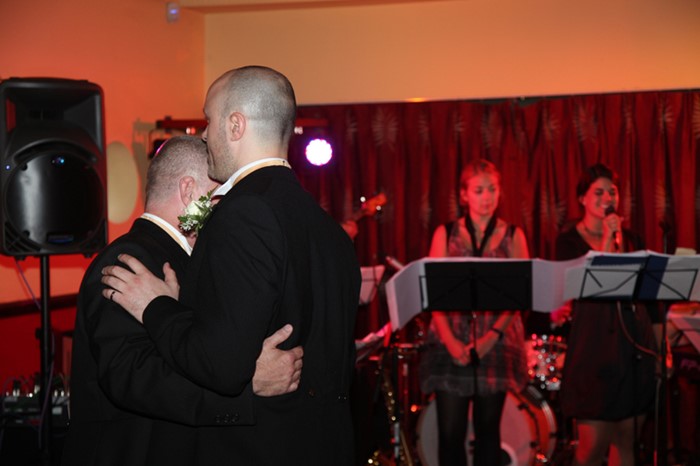 We decided to have both our civil ceremony and reception at the same venue as we had guests from England as well as Ireland and Italy – a multicultural affair! We asked friends and colleagues and looked hard online for a pianist to play during reception drinks and ceremony and a jazz band to play during the meal. Eventually we came across Down for the Count who were flexible enough to provide both and, based on their reviews, we thought they were the best option for us.

Mike also kindly agreed to play some background piano music as we arrived for reception drinks. As we had two relatives singing some Irish folk songs during the ceremony, Mike provided piano accompaniment, which made for a very touching, haunting experience. The songs included The Hermit Song and The Hiding Place by Liam Lawton and, especially for the Italians, Nella Fantasia by Ennio Morricone. Mike was already proving to be a consummate, talented musician at this point. The vocalists also commented on his professional and personable manner, which made it easier for them as they only had about 20 minutes to rehearse before the ceremony!

The 6-piece band played two 45-minute background jazz sets during the meal and two 45-minute dancing sets. As we were very busy coming up to the wedding, we hadn’t really had time to sit down and decide what songs/music we wanted, so we made a few requests and asked Mike if they could provide a mix of their best pieces.

Their performance was outstanding, exceeding all our expectations. One of the guests commented that she couldn’t believe a jazz band could be so talented and so young at the same time, as you would normally expect such flair from an older band. They played some classic pieces and, of course, our requests, which included Have I Told You Lately That I Love You for our first dance. Another request was Valerie, Amy Winehouse style. The singer belted out such an amazing rendition that, as it was our first dance and we were quite nervous, at one point we thought it was the Winehouse CD playing!

The band then played and sang some electrifying dance pieces, which got everyone dancing. They continued to play until 10 pm, when the DJ began. We must admit that by that point the atmosphere was so exhilarating that we wished we’d booked them until the end!

Between the piano music during reception drinks and ceremony and the jazz band later, Down for the Count were with us throughout the day. We were absolutely blown away by them. They scored top marks in every area, from professionalism and flexibility to talent and stylishness. Mike was incredibly efficient and organised throughout the process and he was a pleasure to deal with. We would recommend this band for anyone who wants to give their function, wedding or party a special edge.